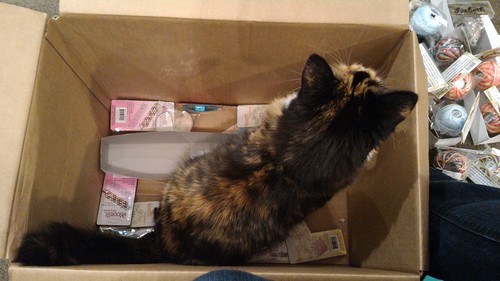 So, if you didn’t know, I’ve been asked to partner in a knitting shop. I’m terribly sorry if I start talking about the shop ALL THE TIME. I’ll try to contain myself. 🙂 It’s been exciting and fun and an awful lot of work. That is also part of what is keeping me from posting as much as I used to, but I’m trying to make up for that now with lots of posts with all of the pictures I’ve been saving.

So! Back to my story. I was unpacking at the shop. We had a shipment in from Handy Hands and I was sooooo excited because it’s the tatting thread. All of the lovely tatting thread and you know how I love my tatting and my tatting thread. I had most of the items out of the box when I turned around and someone had jumped in the box. 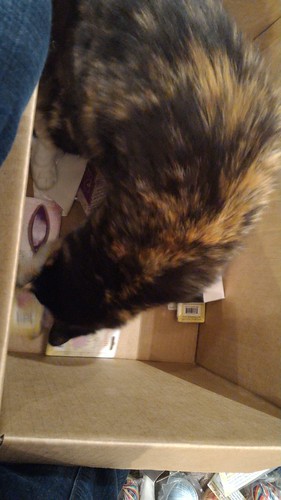 Kokomo was in the box. Not just in the box; she was playing in the box. What could she play with in that box? Tatting shuttles. The cat loves tatting shuttles. She took advantage of my unpacking to bat them around the box and play with them while still in their packages. One of these days I’m going to shoot a video of me tatting with Kokomo on my lap. She likes to bat the shuttle when I drop it. lol 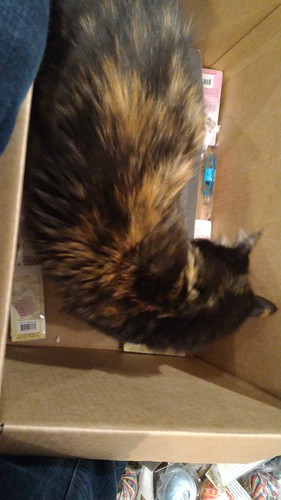 There she goes again. Chasing the shuttle. Ha!

One thought on “I Was Unpacking At the Shop”